The Goddess Vortex disc acts as an accelerating device and an attunement instrument to cleanse your DNA from remnants and frequencies past which are affecting your body and your consciousness in a way that is against the good of your higher self. And as such allowing the ascension process to move forward without delay.
Using this disc will allow the energies to be magnified and applied directly to the one in question, and tune the body of the beholder and attune the DNA of the beholder with the frequency of THE SOURCE entering GAIA. 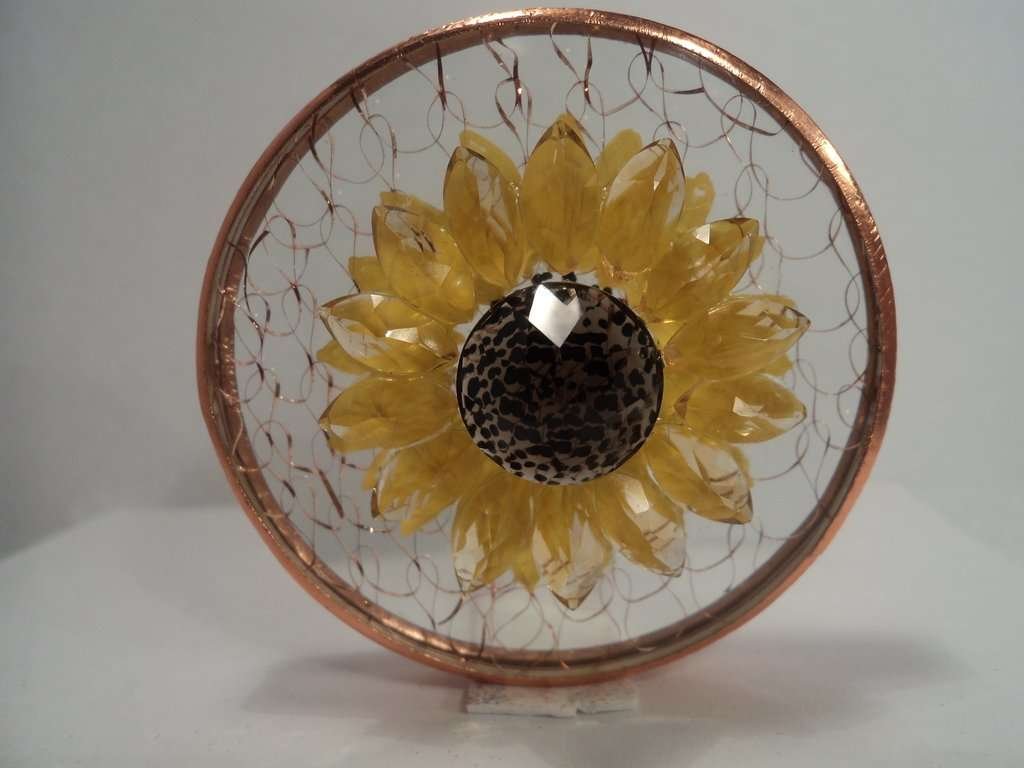 I woke up at night and was pushed urgently to create this disc. I saw the sunflower in my mind clearly. Each dot in the center of the disc had to be perfectly aligned, to create a vortex of sorts. I did not understand what the emergency was. I asked my guides to explain to me what is this disc and what does it do.

The answer was quite surprising. This Disc works on your DNA codes. It somehow upgrades the DNA sequence. This disc also works on Solar Plexus and connects all the other chakras. 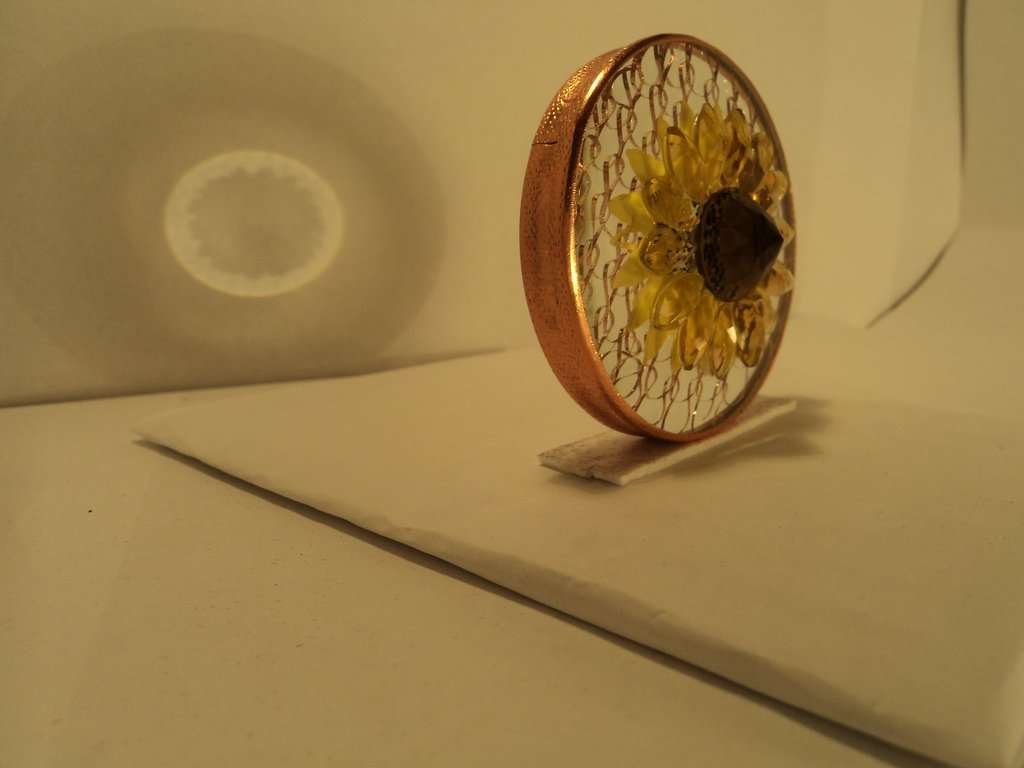 Goddess Vortex Sun Disc is hand made by me, therefore it might vary slightly from the picture as I'm guided to do so for you. A guide on how to use it and the meaning of all the ingredients will be included with your order. It measures 2 inches in diameter and is made of genuine citrine quartz.

It is securely packaged and beautifully wrapped and comes with a special pouch for you to carry your disc in. Please note that you cannot wear this disc. You can carry it in your pocket, purse, hand, but it is not designed to be worn on your body.

Please note that since I put each and every single tool by hand and imprint them with energies it takes me roughly 2 weeks to make each one, along with the shipping please allow 2 - 3 weeks for delivery. Thank you :) 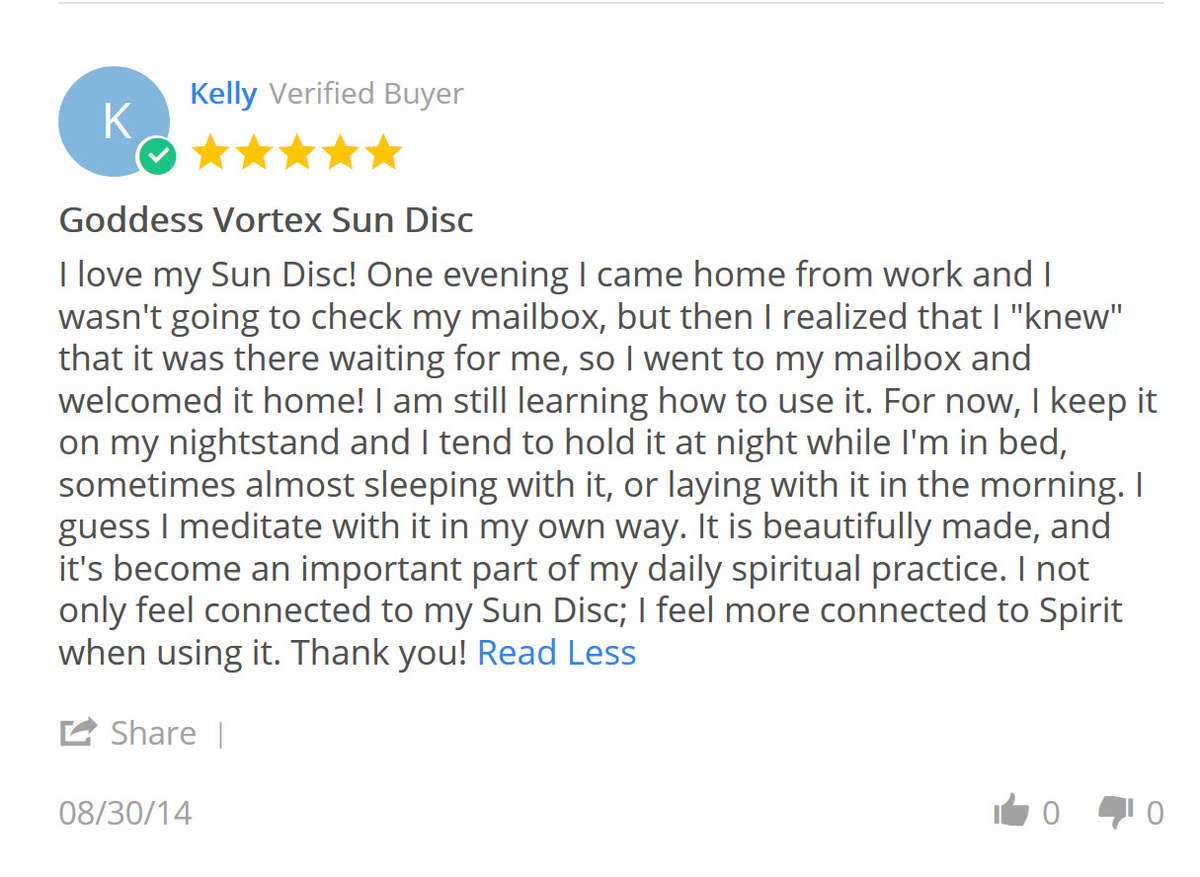 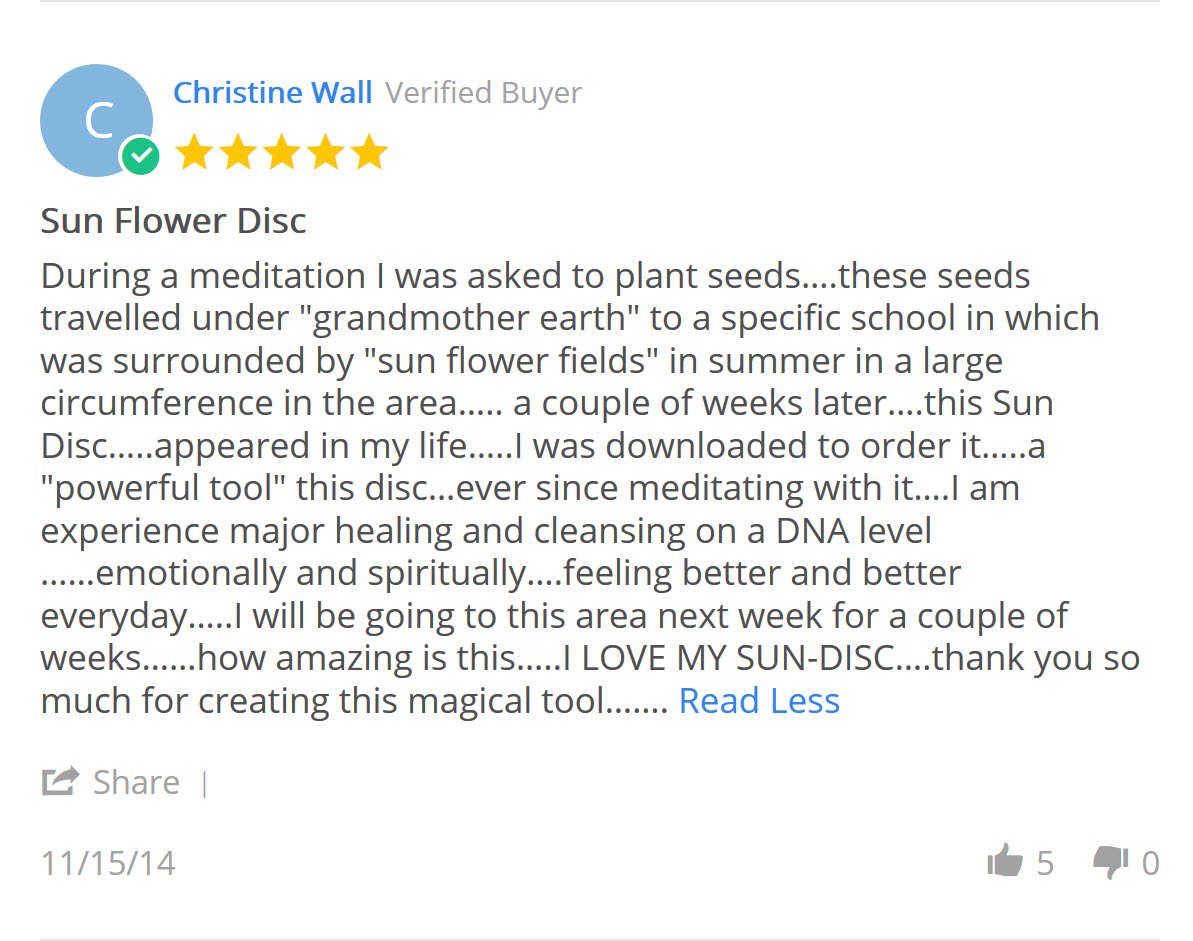 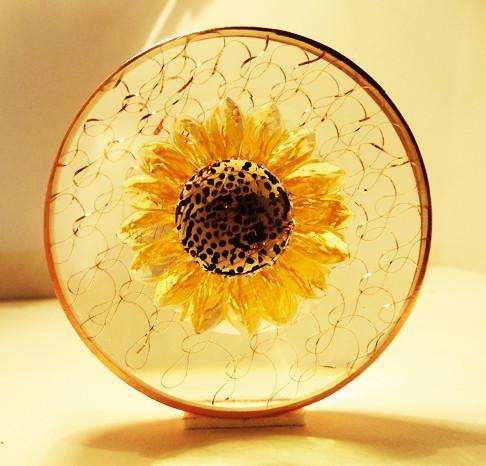 “As the fabionachi sequence swirls into the proportional frequency of the DNA codexes, the ingeneration of the DNA principles and polarities begins to unfurl the processes within the sub atomic particles of the DNA structure of the one holding the disc.
It is also possible to apply this frequency to another, through the use of the energy frequency of the one holding this device. For the energy that is being shifted through the intercalating of the copper union of the disc allows for greater transference of said energies to occur. Upon the simultaneous existence of both polarities, the swirling of the DNA helixes aligns perfectly within the vehicle of the creation allowing the toxicity and the toxic matter within the human vehicle to leave via that elimination channels.
Furthermore, accelerating the way for other such upgrades. Removing the debris, and making room for new informational frequencies
that are sent into your bodies. The disc holds the representation of both polarities, of your creation selves allowing your sub consciousness to OPEN to the divinity within you. Allowing your own frequency to change the disc and thereby interlace your frequency with the frequency of mother and father god. Forming a triangular decree of energies within which the truth and divinity of self can be found.
What we are trying to say to you dearly beloveds, is that upon holding the disc you are engaging the energies of your sub atomic principles to step forward, and the vortex that has been created to pull your subconsciousness into the sphere, allowing you to pass through the zero point and return to your true state of being.
And so, the disc acts as an accelerating device and an attunement instrument to cleanse your DNA from remnants and frequencies past which are affecting your body and your consciousness in a way that is against the good of your higher self. And as such allowing the ascension process to move forward without delay.
Using this disc will allow the energies to be magnified and applied directly to the one in question, and tune the body of the beholder and attune the DNA of the beholder with the frequency of THE SOURCE entering GAIA.
Know that this disc comes directly from the mother father god, representing itself in a GODDESS Vortex of your creator selves, the feminine energies held therein. Yes indeed the design comes from the father/mother god. Directly from THE SOURCE. Aligning you with your higher self and your mission here on earth. Yes indeed for it opens up the solar plexus of creativity channel of your being and sends the vibration throughout your whole physical and sub structural bodies.” 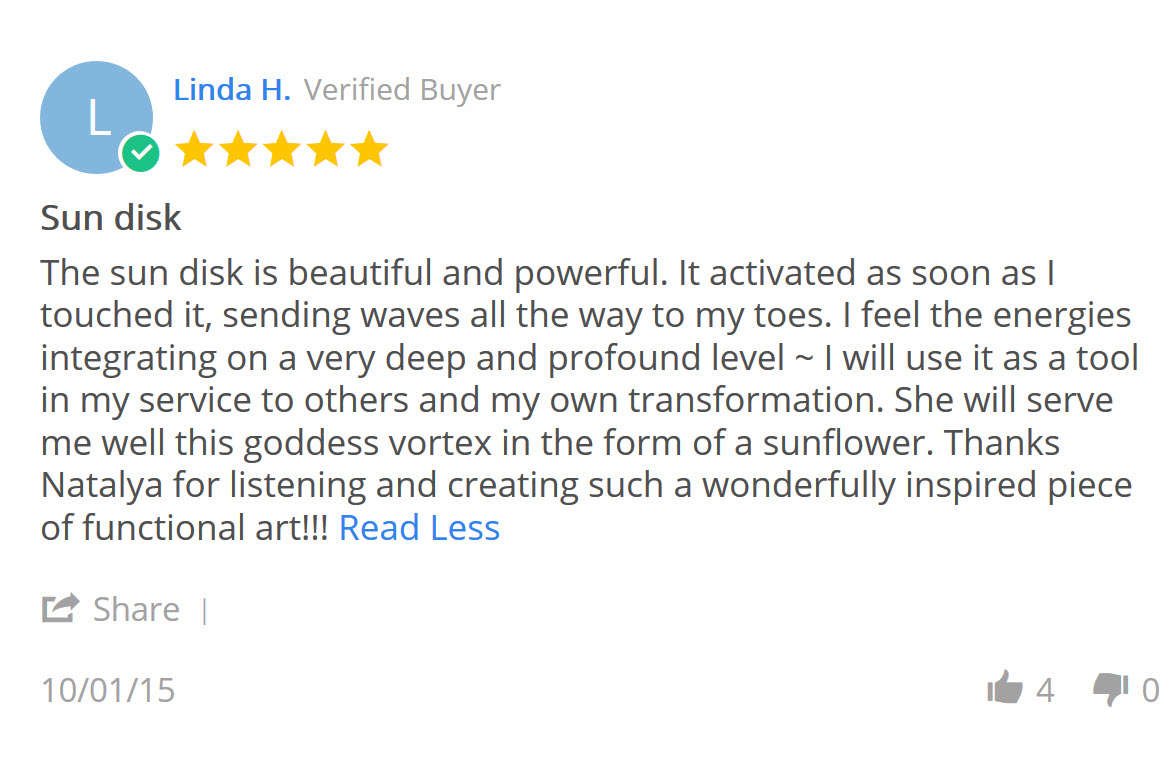 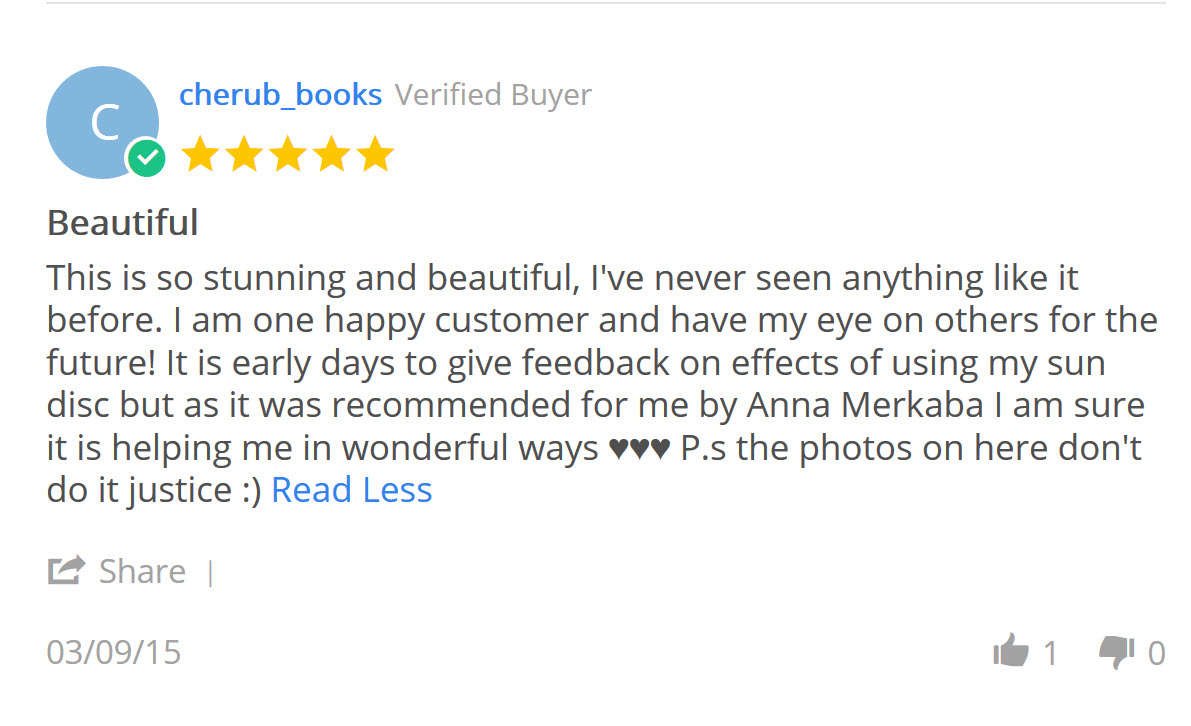 The sunflower moves itself in the most direct position in front of the sun so it can get the maximum sun rays. This is symbolic of spiritual faith, and worship because we follow our belief system as the sunflower moves to face the life-giving rays of the sun.
The sunflower is the Greek symbol of Clytie (a water nymph) who turns into a sunflower after grieving over the loss of her love (Apollo). The mythological symbolism here is that Clytie (in the form of a sunflower) is always facing the sun, looking for Apollo's chariot to return and she might be joined again with her love. The sunflower is also a symbol of Daphne (another Greek nymph).
In Chinese symbolism, the sunflower (and sunflower meaning) deals with long life, good luck and is considered very auspicious. It's yellow color signifies vitality and intelligence. It's a symbol of happiness too.

In esoteric Christianity, the sunflower is a symbol of God's love. The sunflower as a symbol can also represent the unwavering faith that guides the soul to the highest spiritual attunement.
Sunflower is a perfect symbol for the faith because the blossom (bright and bountiful) is always seeking out the light. Symbolically, this is spiritually akin to the heart/soul of humankind always seeking and attaining unity with the light of faith and keeping a connection with the Source/God/Goddess of one's own understanding.

As a yellow flower, the sunflower can be compared to the solar-plexus chakra (Manipura). This chakra (and its color) governs intellect, and is a central force of perception as well as self-awareness and personal evolution.

Actually, the symbolism of water comes into play with sunflower meaning too. According to Ted Andrews in his book Nature-Speak, later builds up in the cells of the shady side of the sunflower's stem and pressure forces the blossoming head in a steady arc toward the direction of light. Water carries powerful symbolism of force, emotion, cleansing and purification.
Source: http://www.whats-your-sign.com/symbolic-sunflower-... 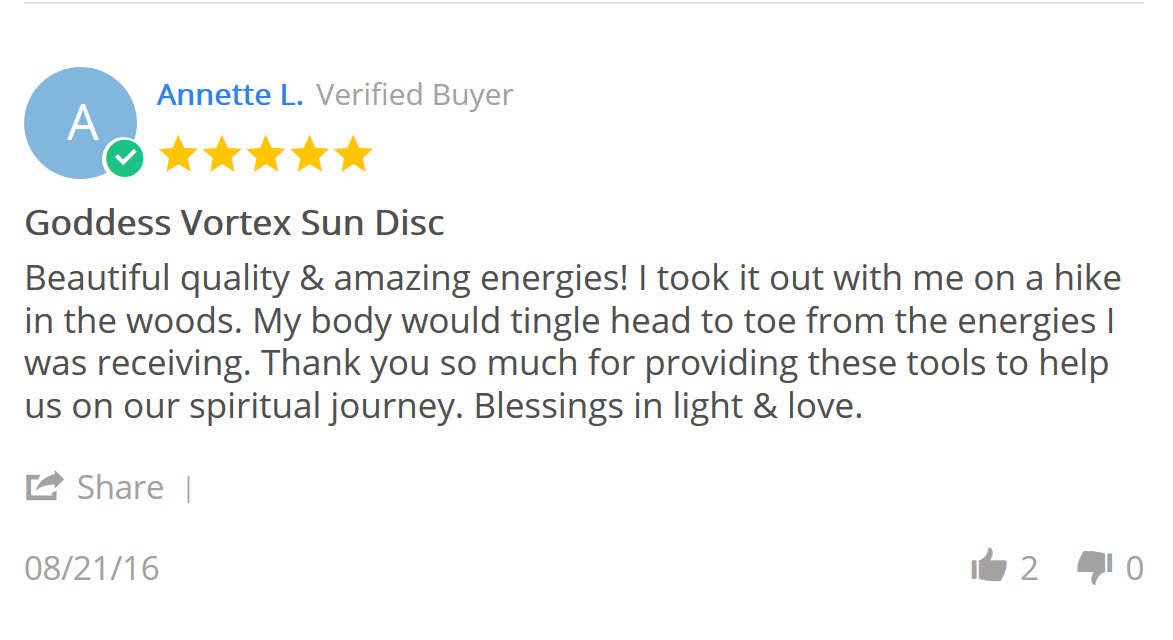 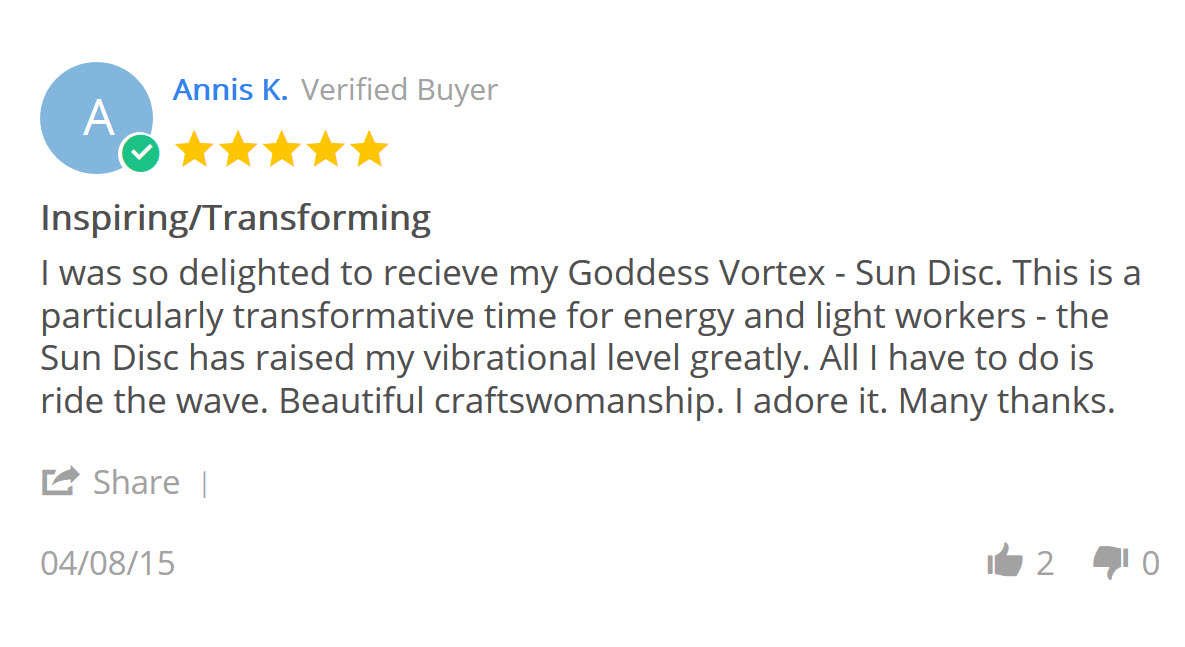